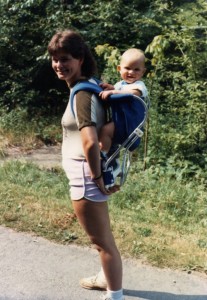 Carleen was my high school sweetheart, one of the kindest people I have ever known, and, due to some great stroke of luck, my life partner for almost 39 years. We were married for almost 34 years when she passed away suddenly, in February 2011, losing a 25 year battle with major depressive disorder. Depression kills. When all versions of anti-depressant medication fail, then all  combinations of increasingly large doses of powerful anti-depressants fail, and when even experimental  anti-depressant medications fail – depression kills.

Above all else Carleen was a loving mother to Benjamin and Kelsey Libert. Carleen also was a scientist, earning a Masters Degree in microbiology from Rutgers University. She was a volunteer who gave her time to hunger relief organizations, to the Girl Scouts, to the Mullica Hill Women’s Club, to teaching Sunday school and more.

Carleen’s favorite “after all the work is done” activity was gardening. From the beginning of our relationship I knew she possessed a green thumb, which she inherited from her mother, June Lane Buggle. Carleen simply could get things to grow – magnificently. Her plants were the envy of most, except for her few peers, and with her peers it was simply a shared passion.

Carleen invested countless hours working on the gardens around our house at 95 South Main St. in Mullica Hill, NJ. Together we built front (road side) gardens, gardens around trees, gardens along brick paths, gardens on the side of the house, flower beds everywhere, large vegetable gardens and even a herb garden.

Carleen was an organic gardener, shunning the use of chemical fertilizers and weed killers. Together we built “compost bins” in which we would, each year, piles leaves, household vegetative waste and other materials that we used to create a rich, brown, compost what she used to mulch and fertilize the flower and vegetable beds. And those flowers showed the effectiveness of that approach. Her gardens were widely admired by passersby.

For years, Carleen looked upon the “highway island” of weeds, on a small patch of earth bounded on all sides by roads, located diagonally across from the front of our house, and lamented that the State never did anything to improve the situation. After her passing the Women’s Club of Mullica Hill, with our family’s support, undertook an effort to make her vision a reality, in part funded by my request that in lieu of sending funeral flowers people contribute to a fund to create a living flower memorial to Carleen. With the assistance of the Women’s Club I presented the idea to the township and, although the local government could not officially approve the project – sinc “the island” is actually owned by the State of New Jersey – the members indicated their approval and support of the idea.

Both fortunately and unfortunately, while family and I were still grieving, someone intervened – without ever asking about Carleen’s vision – and started to build a version of a memorial that made me both happy and sad. Happy that something was happening to bring about change to the weed island but sad when I saw the “finished product”, consisting of a wall of plain cement blocks, a row of juniper bushes on each side of the cement block wall, a pile of white river rocks at one end of the wall, a scattering of perennials and a few annuals. But, until now, I kept my mixed feelings to myself and simply went about making the garden into what I knew was Carleen’s vision – a splendid mass of colorful, ever-blooming, drought and heat tolerant perennials spread across the entire island, spiced up and made more colorful by each year adding colorful annual flowers and more perennials as time, space and money allowed.

In just one year of what I called “garden therapy” – digging in the earth, hauling compost, manure, topsoil, cultivating, weedking, hauling water, trimming plants and more – which allowed me to both grieve and heal by feeling close to the earth that Carleen felt so close to and by building something beautiful that I was designing and building to last years beyond my own departure – I built something that was beginning to feel worthy of Carleen’s life, a worthy memorial to who she was.

Please support me in keeping that vision real and consistent with Carleen’s values.