Dyed wood mulches may look pretty, if you value uniformity of appearance and don’t otherwise consider yourself as having a gardener’s “green thumb”, but the more you know about gardening the uglier wood mulch looks . . and the less you use it. Based upon decades of experience I can attest that the only place a knowledgeable gardener might use dyed wood mulch is as a cover for a footpath, one where you don’t want anything to grow.

Why is using black dyed root mulch a bad idea and NEVER used to cover flower beds by well school gardeners? (But it is often used by landscapers, to “make things look finishd and pretty”, when dealing with consumers who aren’t gardeners.)

These links lead to articles that spell out why dyed root mulches are bad for flower gardens:  Is Your Mulch Miserable or Magnificant?  and The Best Garden and Landscape Mulches You Can Buy

Here is the shortened explanation of why, given the choice of using composted leaf mulch “as mulch” is the FAR better choice than using dyed wood or root mulches:

Carleen religiously listened to Mike McGrath’s “You Bet Your Garden” broadcast on local public radio station WHYY, which on Saturday mornings followed the CarTalk show that I listened to – so we ended up with a bit of cross-training. My efforts in building the memorial garden have been guided, in substantial part, by the knowledge I gained about gardening from working directly with Carleen for almost four decades and from my knowledge of her values. When it came to gardening Carleen knew her business. Gardening was her passion and it showed. I have done and will continue to do my best to honor her values in my effort to build and maintain a memorial garden that truly honors her. In this case, on this issue – of whether “uniformity of apperance” (all public plantings on Main Street musl look alike) – I will not yield. This is entirely a case, in the most literal terms, of appearance over substance. Insisting that the memorial garden’s flower beds be buried under 2-4 inches of wood mulch goes against everything I’ve learned about gardening and Carleen’s values.

This is a picture of “quackgrass“. Carleen Libert and I did battle with quackgrass for years. I’ve seen what quackgrass can do to gardens. It kills them by competing for space and nutrients. It weaves its leaves directly into growing plant’s roots and leaf structures, strangling them and competing for sunlight. It is deadly to gardens.

Quackgrass is an invasive weed. It is one of the nastiest invasive weeds known to gardeners and farmers alike and it is currently and vigorously working its way into the flower beds of the Carleen Libert Memorial Garden. In fact, this weed loves the memorial garden for the same reason the hundreds of flowers and bulbs I have planted love it: the soil is very rich in organic nutrients and is loosely compacted, which allows for root growth and air circulation.

What makes it so bad? Quackgrass grows quickly. It has very deep roots that make it hard to extract. Those same deep roots make it hard to eliminate with ordinary surface chemical treatments. They DON’T WORK. Worst, its rizomes – which can run for 2 or more feet in any direction – must be entirely dug up. If you leave any piece in the ground it will begin growing. The ONLY approach that works is a consistent and thorough eradicaton effort. One that requires a rich yet loosely packed (not compacted) soil that you can dig into and manually – slowly and carefully – follow the roots and pull them out without breaking them. This is the only way, and up until the township insisted on laying on inches of root mulch, the garden was in perfect shape to wage the battle – the next stage in building a garden that could last for decades with minimum care.

I also know what it is like to lose a garden to this weed. Our backyard borders on a field. That field is overgrown with this weed. In just 2 years, while grieving and investing my time in building the memorial garden, have lost an entire flower bed, bordering on this field, to this weed. The ONLY way I will be able to recover this lost flower bed will be to dig up all the soil in the flower bed to a depth of 12 inches, carefully remove every piece of the weeds runners, insert a 12-16 inch physical barrier entirely around the flower bed and thereafter to remain vigilent.

It is at this time in Spring and in the memorial garden’s development that I had the best chance to control and eradicate this enemy to the garden. How? By visual inspection of emerging leaves, digging into the soft composted leaf mulch laden soil, and manually and laboriously pulling up entire root networks. That window of opportunity is rapidly closing.

Why is a quackgrass so bad?

1. It spreads by rizomes (roots) that bury themselves DEEP into the soil. I’ve pulled up rizomes that was 8-10 inches below the surface.

2. You canNOT kill or eliminate this weed by ordinary means. To eradicate or kill it you have to KILL EVERYHING with chemicals. Everything green must die. Sometimes for more than a year as it is a very persistent weed.

3. The ONLY choice for control in established flower beds is to use the type of composted lead mulch base that I was using which ALLOWS the GARDENER to use “mechanical means” to attack the root network. You see, if you don’t get the entire root then each piece – if you only tear at it and rip it – will create a new network of weeds.

So, by covering the flower beds with root mulch I have been effectively thwarted from utilizing the ONLY effective means of controlling this garden killing weed – tracing the shoots, digging down into the soil (which WAS EASY TO DO until now), and extracting the entire root system and every piece of the roots/rizomes.

For more information about this nastiest of weeds you can read here:

http://apps.rhs.org.uk/advicesearch/profile.aspx?PID=283 (The Brits have a different name for quackgrass, calling it “couchgrass”, but the Royal Horticultural Society certainly knows how to write concisely.)

The USDA / U.S. Department of Agriculture (Which tends to take a “douse it with chemicals and kill everything approach”) http://www.invasivespeciesinfo.gov/plants/quackgrass.shtml 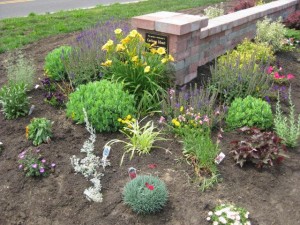